How it Began - Saint Peter Area Veterans Memorial was constructed in 2018.

The Memorial principles and criteria ultimately led to a design that is simple, respectful and powerful. The two focal points are the “Peace and Freedom” statue that is flanked by two black granite “Service Walls” (that begin at three feet in height and rise to six feet, and contains the names of anyone who has honorably served this country in the military, and the “Honor Wall” that is a six foot high black granite wall that encloses a reflective space for honoring those soldiers from this area, who are missing in action, or who have died while serving their country.

The design of the “Peace and Freedom” statue will be recommended by a committee made up of members of the Veterans Memorial Association Board, a representative(s) of the donor(s) for the statue, a member of the Parks and Recreation Advisory Board and a member of the local Arts Center, to the City Council for their final approval. Proposals were submitted through a design competition after funding was secured for this portion of the project. The statue is a design that represents “peace and freedom” which is the reason why so many have been willing to serve, and some have given their life.

The Service Wall lists anyone (from anywhere) who has served in the United States military and is either currently serving or has completed their service. Anyone can place the name of someone who meets this criteria on this wall for a fee of $250. Service members listed on this wall do NOT have to be from the Saint Peter area, in fact, people are encouraged to place the names of any relative who may have served this nation from the Revolutionary War thru current conflicts, on this wall.

The Honor Wall list includes men and women from the Saint Peter area, who have died while in the service of their country, from the Civil War through current wars, and will have the names (and photos when possible) of any person from the Saint Peter area (defined as approximately a ten mile radius from Saint Peter) who remain missing in action or who died while in the service of their country, placed on this wall at no cost to their family. Additionally names of service members from Nicollet County or Le Sueur County, who died while serving their country, but who are from outside the ten mile radius, may be placed on this wall for a fee of $500, the approximate cost for engraving a photo and the information that will be provided.

It is up to the friends and family of deceased military veterans to apply to have their names placed on the Honor Wall. It will be the responsibility of the applicant to provide verification of the home address of the veteran when he/she entered the military, and when the person died while in the military. This can be done from newspaper articles or from copies of formal notice from the military. In cases of early conflicts such as the Civil War, the applicant will provide whatever is available, and the reviewer of the applications will do their best to confirm the information. 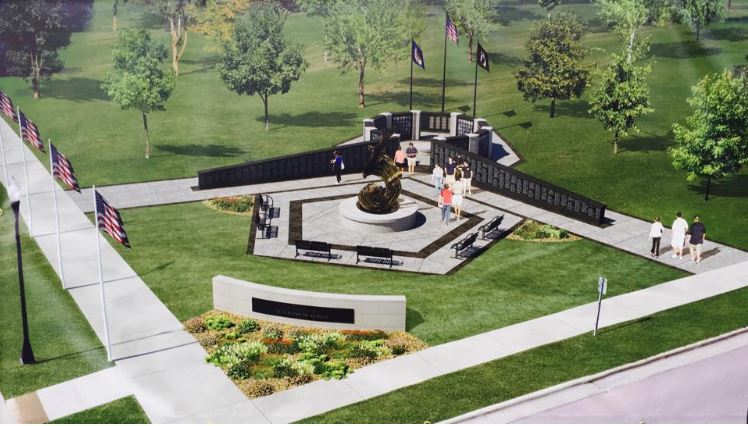